We are already planning for the next one, keep the date free.. A great day!
309 Riders enjoyed our first ever Bike Ride in July 2022..
Pictures and results 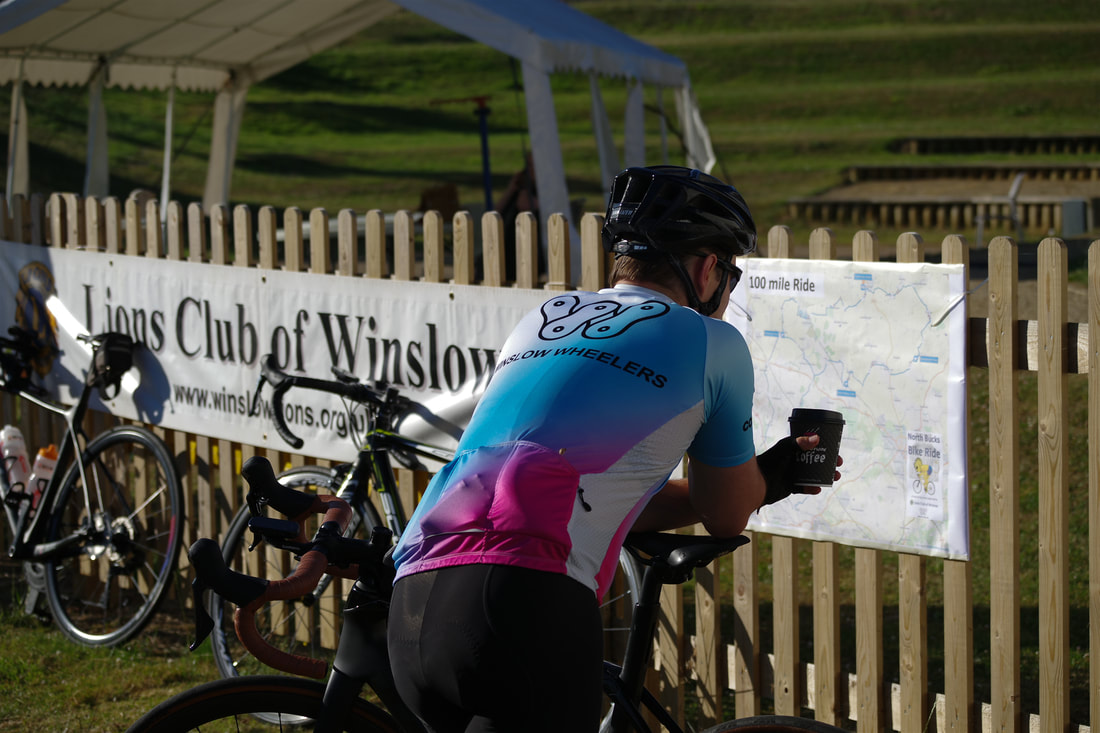 Winslow was the place to be on Sunday 10th July! Over 300 cyclists converged on the town to join in the North Bucks Bike Ride organised by the Lions Club of Winslow in conjunction with the Winslow Wheelers Cycle Club and Furze Down School. Local attractions at Quainton Windmill, Claydon House, Buckinghamshire Railway Centre and The Green Dragon Eco Farm opened their doors to welcome the cyclists - many leisure riders and families enjoyed the opportunity to stop off at these venues along the route who were all given free entry and discount tickets for future visits.

The event was extremely well organised with marshals and water stops at strategic points which proved vital with the temperature soaring to nearly 30 degrees!! These stops were certainly a very welcome sight for the hot tired cyclists - tables laid out with bananas, energy bars, biscuits, ice cold water and juice. It really proved to be a community event with many volunteers offering their services, such as Blue Horse Bikes, Corley Cycles and the local scouts to mention a few. The main sponsorship from Dreams Beds really helped the organisers to plan ahead and make the event the success it was.

The event attracted the more experienced cyclists from local clubs such as the Winslow Wheelers, The Swan Wheelers, The Claydon Cycle Club, and cyclists from as far as Ashford Kent, Chertsey, Stevenage , Daventry, Woking, High Wycombe & St Neots. It was also great to see new cyclists trying the shorter routes. It was open to all and there were tricycles, tandems, and even bikes with child seats.

There were 123 cyclists who completed the 100k route, 89 the 60k route, 71 leisure riders and 26 cyclists completed the arduous 100-mile route.  With soaring temperatures, it was a hard hot ride, especially for those on the longer rides.  The routes took them through the Claydons, Marsh Gibbon, Long Grendon towards the infamous Brill Hill which proved a challenge for many in the extreme heat.  The route then wound itself back to Winslow where those doing the 100-mile route had time to have a quick snack, refill the water bottles and set off for another 40 miles.  The success of the day will ensure it becomes an annual event for the Lions Club and Winslow Wheelers – a great charity ride that has helped raise much needed funds for Mind Buckinghamshire and other Lion Club national and international charities.

Make it a family day out!

Bring family and friends, even if they are not participating, to join in the fun!
We will be joining up with local attractions to offer you special access and facilities during the day of the event.
To get you ready for the 'Main Event', Winslow Wheelers Cycle Club organise regular rides to allow you to build up to your personal goal. Find out more by clicking the button below..

and other Lions Club Charities